The key part of any megagame is the group of people that facilitate the whole thing.

In some games this role is called ‘umpire’ or ‘GM’ but we tend to use the term ‘Control’.
We call them ‘Control’ because the term ‘Umpire’ tends to give the impression that they are impartial arbiters of a set of generally agreed-on rules as might be a tennis umpire or a football referee.
This might be a part of Control’s role, but the facilitation aspect of the Control function means they have a role to play in addition to this. It is especially important in megagames where often they are closed games, both in terms of ‘fog of war’ but also in that the game rules themselves are not available in their entirety to the players.

The term ‘Control’ implies some responsibility for the progress of the game – acting like a ‘control rod’ in an nuclear reactor – which moves to speed up or slow down the fission reaction. Similarly Control might make injects into the game to influence or moderate game flow.

A megagame is not a passive process, like a board game, which would typically be set up and run to a conclusion with all the player interactions being clearly defined and regulated by a set of (usually) immutable written rules.   A megagame is a more dynamic process of multi-player interaction, that might (and often does) involve the use of fixed rules to moderate some aspects of the activity – but also re-quires facilitation and interactive moderation to ensure that the maximum gain to the largest number of players. A good control team will manage this facilitation process invisibly, ensuring that they do not damage the key narratives of the game by appearing to be arbitrary.

So in a very real sense the Control team controls the game on many levels.

As a result, individual members of the Control team have a degree of leeway to develop the game themselves in their particular area. This can, and does, require some quick thinking, imagination and excellent communication skills. In some games we can even see Control developing ad-hoc rules to cover some creative idea brought up by players. This works very successfully where players come up with a wizard wheeze that is perfectly reasonable but falls outside whatever base game system the megagame is operating on. There have even been experiments with dispensing with a base game systems and mechanisms altogether and rely on Control to manage all game interactions and adjudicate results based on their judgement alone. Such ‘free kriegsspiel’ methods are risky and require a high standard of consistency between the various members of the control team, and it utterly depends on a tight, experienced, team all having very similar views on what constitutes reasonable outcomes for the narrative. Generally we have found it more reliable to have a mixed economy of a base game system with can be embellished by the Control Team as necessary – effectively like improvisation within a theme.

It is in the operational games that Team Control – the member of the control team that interfaces between the Master Map and one particular player team – a sort of liaison role – where some of the most interesting facilitation occurs.
In games using the Player Team ↔ Team Control ↔ Master Map approach, Team Control has a great deal of responsibility for the quality of the experience of the game that their players have. It is very like the responsibility a dungeonmaster has with their group of players in a conventional role playing game. 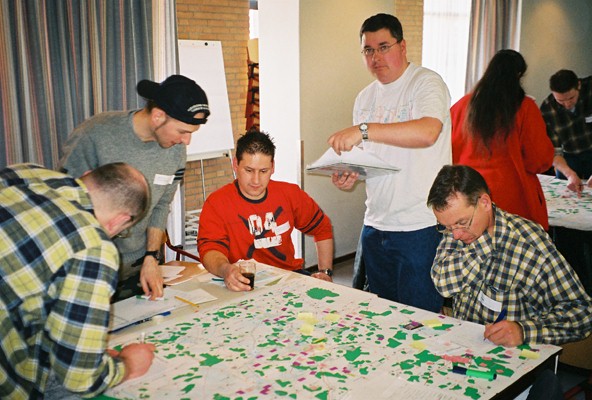 Team Control is often also the person calculating combat results and updating the position on the main map. This is sometimes tricky, especially for those new to it because it can feel like playing a board game – in fact we identified early on the problem of Team Controls ‘going native’ and playing as if they were a partisan member of their player team. To a degree this is reasonable and to be expected, in that we expect Team Controls to be advocates for the orders the players have written – but they are neutral advocates rather than players. At the map table, the Team Control also generally takes low level decisions on behalf of the team on issues that cannot be covered in the written (or verbal) orders given by the players – this is to simulate the initiative taken by junior commanders who we imagine would be in charge of the units the players are ordering about. These low level decisions will aim to reflect their understanding of the players’ intentions (and because the Team Control spends the day communicating with the player team they generally get a good idea of what the players really want, even if they didn’t write it down with military precision (or even if they did!). This is a key example of how Team Control injects that all-important ‘colour’ to the game experience. Players are encouraged to develop their sense of the story unfolding by this sort of independent action. Their subordinate units are no longer merely counters to be pushed around a board, but begin to feel as though they are ‘real’ (or a bit more real, at least).

All this adjudication at the Master Map is usually done in conversation with the other Team Controls who might be handling ‘opposing’ units, and the discussion there will reflect an informed consensus of what is ‘really going on’ at that stage of the battle. The Control team gathered round the master map create the overall narrative of what has happened in a game turn, greatly influenced by the base rules or mechanisms but also by their own knowledge of the historical period and the boundaries of possibility.

I think it is important, however, to make sure that there is a common understanding of the philosophy underpinning the base mechanisms because this provides a sound foundation for any extemporising or judgement calls the Team Controls might need to make. Wherever possible we try to explain the thinking in separate briefings for Control – but it often helps to have a brief face-to-face session with all of the Control Team in the first half-hour of so of the game, while the players are sorting themselves out in preparation for the first game turn.
Where a situation arises that isn’t covered by a specific rule or mechanism it is easy, with experience, to quickly reach a consensus as to what had ‘really happened’.

So, Team Controls establish a rapport with their team early on – and aim tell the story of the division or corps or whatever it is the team is commanding. It is this storytelling aspect which is very important and wherever possible a report back on the outcome of the orders each turn is in the form of a ‘report from junior officers’. So a Team Control might say something like “The commander of 4th Brigade reports that his attack on the town of Kempshott went in as planned, except that the hoped-for air support from the Air Force unfortunately didn’t arrive due to a communications foul-up. The Germans put up a stiffer resistance than we expected and losses were heavy. Fortunately he was able to flank them with some of his tanks2 and eventually the enemy retreated to the east towards Tankerville. The brigade commander says his troops are very tired and worn down and probably only have enough energy for one more attack like that”. This would be in contrast to what might have actually happened at the master map, where under the game mechanisms the air support didn’t arrive because the air force player team forgot to issue an order for it that turn and the attacking brigade had a marginal victory on the combat results table and lost 3 strength points out of 8 and smaller German unit lost 1 strength point and had a forced retreat. Control will avoid using any terminology that is ‘gamey’ or abstract because we believe this detracts from the flavour of the experience and the narrative. It can be entertaining too as unusual events do crop up and can be turned into anecdotes, and control can impart some character into the non-played subordinate units if necessary. For example in this case Team Control might well role play the junior brigade commander offering his (player) commander a few choice words as to his opinion of the (absent) Air Force. 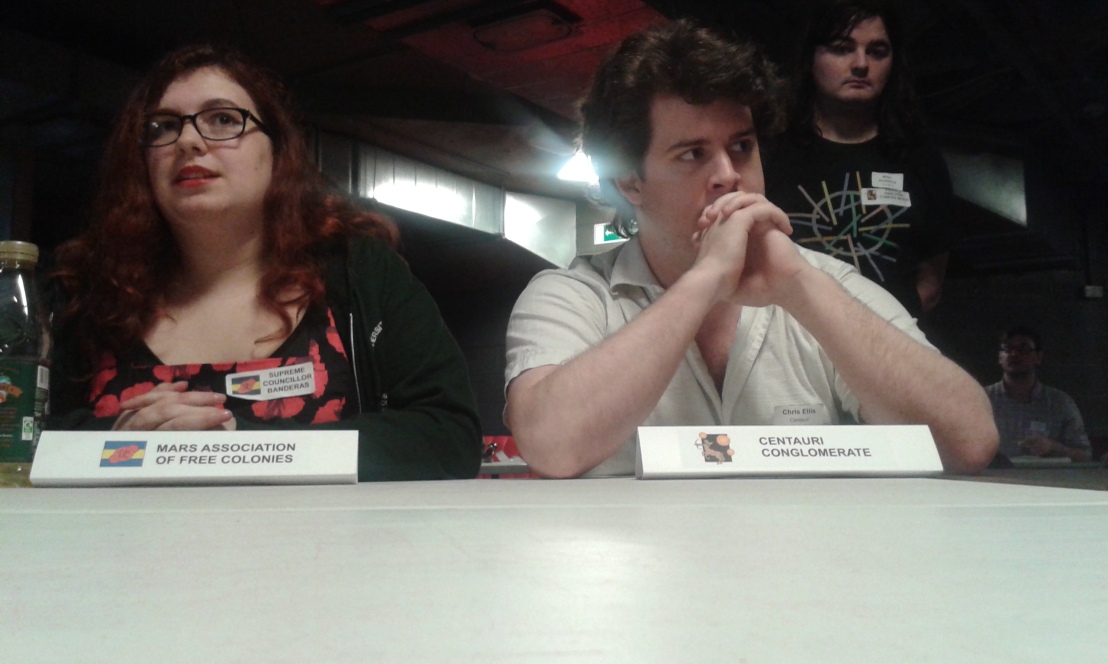 In one example the player team had a very successful operation and had captured many prisoners from a low-quality enemy unit. They asked if they could interrogate prisoners, and Team Control went into a long and boring feedback from disgruntled enemy soldiers complaining about their own high command, the poor quality of the food, how their feet hurt, how they’d had no sleep and so on. This was more colourful that “…you have captured many men from a low quality unit”. And the players didn’t spend too long asking detailed military questions of the prisoners because they (rightly) deduced that these prisoners really had nothing useful to impart.

All of this said, speed is also very important. Megagames operate to strict timetables, and all members of the Control Team have a responsibility to ensure that the game keeps up its required pace. So sometimes the time pressure means reporting back might not be the full dramatic discourse one would like. But the principles remain.

However much we try to avoid it, it is inevitable that a mistake or two will be made on the map at some point, there can sometimes be a lot to work out and the interplay of different units and orders sometimes complex – but we will not normally go back and undo results once adjudicated. To do so would undermine the narrative flow. We might explain to players if a gross error has occurred but otherwise mistakes tend to stay in the Black Box of the master map and can usually be rationalised as fog of war or the friction of command, or simply a subordinate commander making a mistake.

In general I would always recommend to Team Controls that they are honest about major errors and try to agree with the players on a post-hoc rationalisation if possible. However it can be tough on players who have actually being doing well to have their successes ruined by a Control error. With experience and practice, fortunately, this sort of error is rare.

[Next Week – Megagame Control Team (Part 2) : Game, Map, Political, Non-played Controls, plus the relationship between the Designer and the control team.]