Megagame Control is extremely important. A poor or under-prepared Control Team is an order of magnitude more damaging to a megagame’s narrative than poor players1.

Control subtlety influences the game by ensuring the players have the right sort of information at the right time. One might think that megagame Control attracts control-freaks who like to feeling of power and the ability to say what happens. Control freaks generally make poor megagame control team members for exactly that reason. Control is a first and foremost a facilitative role – and it is important that in this role we do not lead the players or take over their game by making decisions for them or by railroading them into choices we think they should make. It is always the players’ game, not Control’s. Control’s role is to make the whole experience feel as open ended and real-world as possible and that players have the opportunity to make mistakes as well as stunning successes.

This is not to say that Control should never offer advice – it can be very important, especially where the player team is inexperienced, to offer options perhaps in the form of “advice from your junior staff”. But this must be done carefully and subtly, and in the form of several realistic and genuine choices and not just the one option you think they should be taking. Sometimes players just run out of ideas and feel stuck. This is an area where Control can really help.

If, as Control, you find yourself making decisions for the players or unable to resist the temptation to put them right when they are going wrong. Or you find yourself inevitably trying to ‘win’ against the other Team Controls at the Master Map table – then being Control might not be for you.

Another key element of the control role is to look out for player problems and this is an important part of facilitation.
Control is on particular lookout for players not getting involved, or seeming out of their depth because this might be an indication of some other game problems. In the case of Team Control it will be obvious if one of the team members is particularly passive (or reading their book / newspaper / laptop).

Lack of involvement on the part of a player might indicate one of the following:

They are feeling out of their depth. This can be a concern, especial with inexperienced or new players. Someone of the control team will do what they can to involve the player and help them with hints on how to engage, some ideas of who to talk to or hints on game-play to encourage them.

Their game role is not holding their attention. This might be a design flaw that the game designer didn’t anticipate – perhaps the role simply doesn’t have enough for a player to do or maybe that particular player finds they’re just not into being the Queen of Naples all day after all. There may or may not be a fix – sometimes its possible to re-role people on the day. Control has a role in acknowledging this and doing what is possible to re-engage the player if possible.

There is some interpersonal problem within their team or with another player or even with a member of the Control Team. These can be very tricky. Sometimes emotions run high, especially if the game is engaging people a lot or where there is a high degree of role playing. Control often has to manage this sensitively and openly, perhaps with brief time-outs. We also have to remember that we’re not relationship counsellors, however, and to some extent we expect adult and mature interpersonal behaviour from all participants and this can helpfully be made explicit, either in the game briefing or in a face to face conversation at the time.

They are having a bad day/year/life in general. Not much control can do about this! Except to acknowledge it. Sometime players in this position just like it that someone noticed that things are rough.

They are fine but had a late night last night and just need a nap. Sympathy is all Control can offer. And not too much of that.

Like so many things, preparation is important for members of the Control Team. Ideally, reading the game materials supplied by the game designer will be enough to get you started – however I always encourage members of the Control Team to get in touch in advance of the game with any queries or to ask for some explanations of any parts that are not clear or seem ambiguous. This can save a lot of time on the day, and is very helpful for the designer.

On the day, the issues Control confront will be extremely varied – no two megagame experiences are the same. Control issues I’ve seen would include:

1. Players have not read their briefings and want you to tell them how the game works on the day as they are playing. Refer them to their briefing. Of course, help where they may not have understood what they have read, but it is not helpful to do everything for them.

2. Players who do ‘decision shopping’ (see above). As time goes on you get to know players who do this regularly. However, if anyone in Control spots it, it can help to pass the word to the other members of Control, if possible.

3. Player – player personal conflicts. Sometimes people don’t get on. We don;t have the skills, time or resources to solve that. However, giving players some down time to calm down if tempers are frayed can help. As can de-roling2.

4. Player – Control conflicts. This can be tricky. If a member of the Control team has so upset players that it is getting in the way of the game, then Game Control needs to intervene. Most often these conflicts are as a result of mis-communication on both sides. Generally, briefly involving another member of Control to mediate solves the problem.

5. Unpopular game results. Players naturally hate it when things go wrong for their side. Sometimes things can go catastrophically wrong, and this will cause perfectly natural feelings of dismay or annoyance. Players can often take a ‘shoot the messenger’ approach at this point. Defeat takes very sensitive handling by Control – and it can sometimes help to point out the positives in the situation, to offer some neutral advice as to options, and sympathy. If a team has been utterly crushed then this is an issue that Game Control and/or the game designer needs to be involved in. In a good game design this possibility will have been anticipated and the game designer will have a ready a pre-prepared new command or team role for the team to renew their part in the game.

6. Pedantic rule-mongers & Optimisers. The briefings for megagames are not like board games or wargame rules. They are never written to be more than a set of guidelines. Control can find itself engaging with players who argue about the precise interpretation of the exact wording of the game briefing (usually to try and gain a technical advantage of some sort). Fortunately this kind of behaviour is rare because it lies outside the spirit of megagames. But where it does occur there needs to be some careful explanation that in the end, Control’s interpretation is what counts, regardless of a player opinion of the legalistic wording of the game briefing. The clue is often where a player asks lots of closed questions in a row in an effort to ‘catch out’ Control. Like ‘shoppers’ if this looks like its happening too much, Game Control might need to explain to the player that this is unlikely to help them get the best out of the game.

This sounds tough – why be on the Control Team at all?

And to a degree this is true, but it is by no means a barrier to contributing to a megagame successfully as a member of the Control Team. 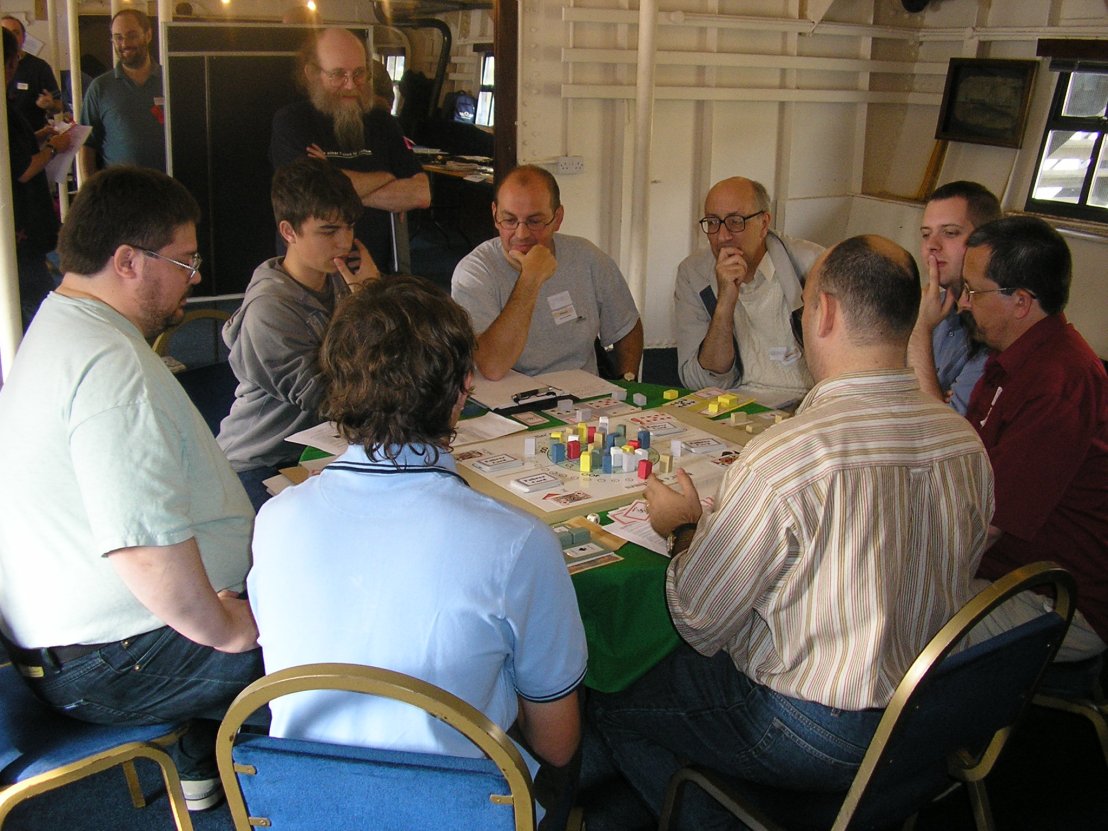 So what does it take to be a good control?  5 Features of Good Controls

1. Like to tell stories about what happens in a game – many gamers already do this. Think about the last time you described a game you have played to someone who wasn’t there. Did you give a blow by blow account of each die roll, or did you embellish it into a story of bravery, daring and genius? If the latter you have the basic narrative skills needed for control.

2. Are you a good listener? Listening, especially active listening is a skill that not everyone has practised but which everyone can learn fairly easily. If you know what I mean by ‘active listening’ then you’re there already. (See annex on Active Listening).

3. Emotional intelligence. More tricky ground here. By this I mean, in the megagame context and from the control team point of view, having some empathy for the players and their in-game problems. Again, not everyone might practice this but it is learn-able.

4. Sense of humour. Yes we’ve all got one, but it is important to be able to interact with players with a sense of the ridiculous and a sense of fun. Playfulness is also important – remember that no matter how serious the game subject, there is always a element of entertainment – people do this for fun. Constructive use of humour can also help reduce tensions for players who might be feeling that things are not going well. Mocking players, on the other hand, (tempting though it might be sometimes) is neither helpful nor constructive, and can damage their relationship with the game – especially coming from Control who have an unequal power relationship with the players.

5. Background historical or thematic knowledge. Actually this isn’t essential for every type of Control role. It is very helpful to know something before you start – though often the game briefings will contain a wealth of background information on the historical period. Political Control generally need a good working knowledge of the historical period. Team Control or Specialist Control probably less so.

Anyone who has been a role-playing Dungeon Master or Game Master for a while and run role-playing games has generally already practised all the core competences that are needed for a good megagame control team member. We have found that experienced role-players have a bit of a head-start over conventional mainstream wargamers when it comes to learning to be an effective member of the Control Team.

There are all sorts of reasons people give me for liking a Control role. For some it is the enjoyment they get from seeing the whole process play out and work. For others is it the interaction with players and a sense of helping them have a good time.

And being on the control team has one very big plus to it. You get the god-like ability to see and know what is going on and watch the story unfold before you. You see the drama of the player teams struggling against difficult odds, you see the full genius of that bold move that turns the course of the campaign you see the consequences of gross player incompetence. You also participate in a very central way in the act of collaborative storytelling that is a megagame, with an opportunity to be creative and imaginative within that framework.