One of the most important traditions in megagaming is the post-game debriefing. It is really important that everyone gets together at the end for a short review of the game and to give and hear some feedback.
The format and timing of the post-game session will depend on the time available in the venue and the numbers of players and team.
Typically we allow about half an hour for the plenary debrief at the end, though it can be longer.
Ideally someone from each of the main player teams should be invited to give a short account of what their team anticipated for the day, their plan, and how it turned out. Encourage them to give one or two key points and to keep it short. Emphasise short, at the end of the game many players really want to give a blow-by-blow account of the day – avoid that if possible. And occasionally one gets players who just like the sound of their own voice!
We also ask some of the control team for their feedback – for example in a game with a main map, the Map Control might give an overview of events.
Also useful in closed games is to leave the master map open for a little while before clearing up so that players can take a look at what was really happening in their game.
The aim of the debrief at the end of the day is mainly to allow players to get a sense of some of the unfolding narrative that they would never know about otherwise.
We also encourage participants to write post-game After Action Reports (AAR) on the Megagame Makers Facebook group or on blogs. The post-game feedback from these sources is often really useful and it has the added benefit that megagamers who were not there get the chance to get a flavour of what they missed. 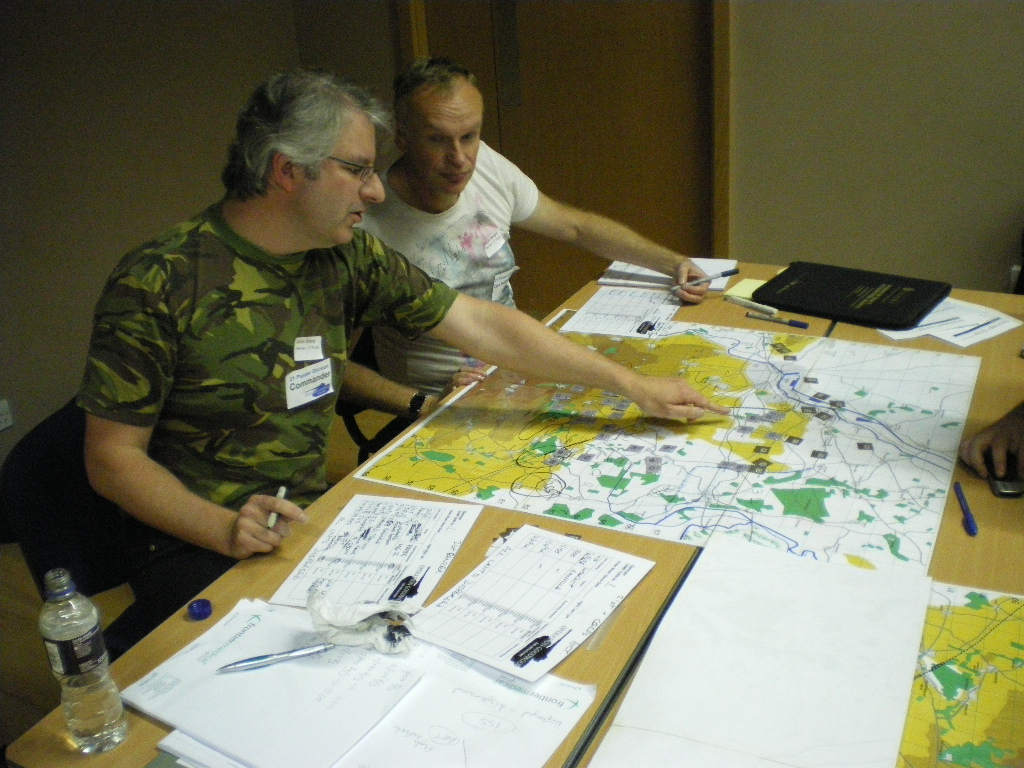 The second main feedback tool we use is our Megagame Critique feedback form, This is a single sided questionnaire. We have used this fairly standard critique sheet for many years now, which has been very helpful in allowing us to compare subsequent runs of a game, or similar games.

The sheets are handed out at the end of the game, during the de-briefing session. We do this because we want the players to reflect a little on their day before filling it in. We also make a point of collecting the forms there and then. Experience has taught us that we lose a lot of feedback by waiting for someone to return a form later or respond on line. Also we want to be able to compare immediate responses to the game. If some respondents are giving the immediate reaction and some are reacting days or even weeks later they will have a different perspective.

Most of the key scores on the form are based on a 1 to 5 scale, and they are very helpful is getting an overall sense of how the game went.

In many cases, designers already know if a game went generally well or generally badly. What is harder to determine in a game involving many players interacting in widely different ways, if how everybody experienced the game. It is quite possible for a game to have gone generally well, and at the same time for a particular team to have had a miserable day. Psychologically, they will be disinclined to say this, especially if everyone else is chatting afterwards about how well the day went. The critique sheets not only provide a numerical measure, but also space for written comments and thoughts on the game. It is from these that we get a sense of where the ‘enjoyment black holes’ might be.
Sometimes this will be a result of game structure problems – a team might not have enough game interactions with other teams – sometime it can be as a result of the team’s own behaviours – i.e. they pissed off their other team members and nobody would talk to them thereafter. Or some combination of the two even.
It is important to hear these criticisms in a positive light – even if they are writing things like “…this was the worst game I ever played…”. Do not get defensive, read on – they might have some constructive suggestions that will make the game better – and as designers this is what we are always trying to achieve.
In our critique questionnaire we ask a number of key questions. There is nothing special about them, they just reflect what we’d like to know.
Of course, once you run a few megagames, the results have a value for rough comparison – though I would never go so far as to use the term ‘league table’ in polite company – it is something of an incentive to try to get an improving ‘Enjoyment ‘ score for your megagames.

The questions we ask are:

Game Briefing Materials: How well did the briefing material supplied enable you to play the game properly?
Rate of Play: To what extent were you under time pressure whilst playing? 5= too fast, and 1 = too slow
Personal Involvement: How much were you involved in the game action, or interactions with other players?
Personal Enjoyment: How much fun was it for you?
Game Difficulty: How hard you found the problems posed by the game and the situation you found yourself in?
Historical Feel: To what extent did the course of the game match up to what you would expect might happen historically?
Quality of the Control Team: The Control Team make the game run, how well or smoothly do you think they did this (so far as you could tell)?
Quality of Other Players: How well did you feel other players coped with the problems posed?
Admin Charge: To what extent do you feel you got value for money today?

Part 2 : Other questions, not numerically scored

To help us to gauge what sort of background knowledge players come to the game with, answer the following by ticking the ONE box that most closely matches your background knowledge on the period in question:
[] Read only the game briefing material
[] Had a quick look at a book
[] Only one book on the subject
[] Several books on the subject
[] Studied the period/subject extensively

To gauge the likely take-up for future games (or re-runs of this game) please indicate below:
If this game were run again within 12 months, would you play again? YES/NO
If a game similar to this one were being organised, would you want to play? YES/NO

At the end of the form is space for the participant to offer suggestions, either on improvements to the game they have just played, or suggestions for future games.

There are some things we have noticed having review many of these feedback exercises.
Responses to game briefing materials seem to be independent of the actual quality or writing or production values We think this is usually related to how well the materials related to the player’s game role and ability to engage with the game.
Player involvement and player enjoyment are often linked.
The value for money question (Admin Charge) is also scored low when enjoyment is low.

There is a third type of debriefing which I regard as essential after any megagame and that is the post-game social. What this is will depend on venue and timing – it can be as simple as naming your favourite local pub and everyone descends on that (remember to warm the pub first if its likely to be a lot of people), or you might be able to arrange something in the venue itself, or book a room at a restaurant. It all depends.
But whatever you choose it is important to have some sort of post-game event because this is where players really get to expand on their megagame war stories about who did what to whom and how often – and how they were shafted by their allies, or how they outwitted their enemies.

Megagames are primarily about a narrative arising from emerging gameplay and the post-game social session is, above all, the place where megagamers get to tell each other about that narrative.

NEXT WEEK : Is it a megagame?